Friends you are welcome in spiritual stories in English and I am your friend, Mungeri Dhaliya.

Friends, today we will tell you the story of Maharaja Ambrish. In the defense of which Lord Vishnu had the Sudarshan Chakra. 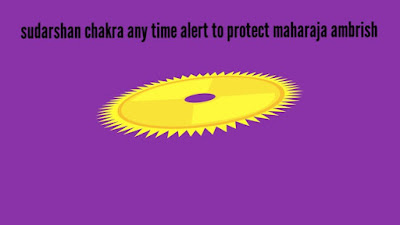 In this story, we will know that there should never be any disrespect of any devotee. Because the common-looking devotee is very dear to God So let’s start friends.

Once there was a king, his name was Ambrish. He was Vaishnava. It is a matter of time. There was a festival of fasting Ekadashi. Raja Ambrish fasted on the day of Ekadashi and invited Rishi to visit him in Davadashi. There Maharshi Durvasa came and telling the king to take care of him. Durvasa ji said that I came to bath. But they started getting late and the time of passing was going on, then all the sages said the King  passing of. the King took the passing of charanamrit of  God . Durvasa Rishi there came and he saw that the king was passing by. Then Durvasa rishi became angry. Raja Ambrish told him that the time of transition was going on, so I have taken the steps. But they did not believe and took out their hair and showed the action. Sudarshan got angry after seeing all this and he Destroyed the operation. And after seeing Sudarshan, who was behind him for destroying the Durvasa Rishi, Durvasa Rishi was scared. And he escaped from there and he went to all the Lokpalas but no one did  help them. Then he went to Shiv Shankar but he also refused to help, then he went to Lord Vishnu and told him that Lord protect you from coming to your shelter.I am in your shelter Your Sudarshan Chakra is behind me. Please protect me when Lord Vishnu said that I can not protect you. Because I am under my devotees. If you go to the refuge of King Ambrish, they will protect you.

Then he went to the refuge of King Ambrish, then the king prayed for Sudarshan to calm down. Sudarsan was restored and the Durvasa Rishi was defended.